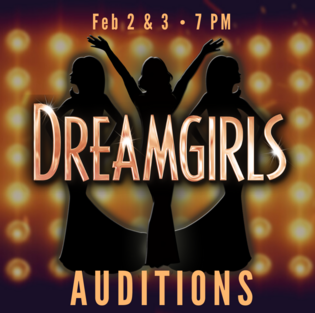 When Deena, Effie and Lorrell form a music trio called the Dreamettes, Curtis, an ambitious manager, catches their act at a talent show and offers them the chance of a lifetime to sing backup for a national star. A sweeping and inspirational journey, Dreamgirls chronicles one Motown group’s rise from obscurity to superstardom. Adapted for film in 2006, it starred headliners such as Beyonce, Jennifer Hudson, Jamie Fox and Eddie Murphy. The subject matter of this play deals with a musical contribution to America of such importance only now, decades later, are we beginning to understand. Through gospel, R&B, smooth pop, disco and more, DREAMGIRLS explores themes of ambition, hope and betrayal, all set in the glamorous and competitive world of the entertainment industry.

AUDITION INFORMATION:
We’re excited for you to audition! For the audition, please bring with you a head shot or a recent photo and be prepared to sing at least 32 bars of a song, in the style of the show and that shows off your vocal range. You are allowed to sing from the show if you would like to, but it is not a requirement.

Piano accompaniment will be provide. If you are using a track, please be sure that it is a Karaoke or instrumental track. We will provide a speaker to plug your phone or iPod into.

You may be asked to stay for a dance call. Please bring comfortable clothes/shoes to move in. Not all characters will be asked to dance.

DEENA JONES
African American Female
Age: 18-40s
Voice: Mezzo Soprano
Principal role
Initially modest backup singer for Dreamettes. Becomes the lead singer of “The Dreams.” Marries Curtis but leaves him when she finds out about his illegal activities. Wants to become an actress. Beautiful. More of a commercial pop vocal.

MICHELLE MORRIS
African American Female
Age: 18-40s
Voice: Soprano
Principal role
Replacement backup for Effie. Wants to stay out of fighting. Falls in love with C.C., and helps bring brother and sister together in the end.

JAMES "THUNDER" EARLY
African American Male
Age: 30-50
Voice: Tenor with a strong falsetto
Principal role
A James Brown-like flashy star of early R&B that Curtis steals from Marty. A trendsetter, but trends pass him by. Be ready to be a showman, and let loose.

ENSEMBLE AND FEATURED ROLES
Aged 16+
The ensemble in this show will be featured a lot with lines and solos throughout. We need African American and people of all color for all different supporting and featured parts of the ensemble:

M.C.
Male or Female(as male) - Master of ceremonies at The Apollo Theater

Come be a part of this wonderful theatre classic!