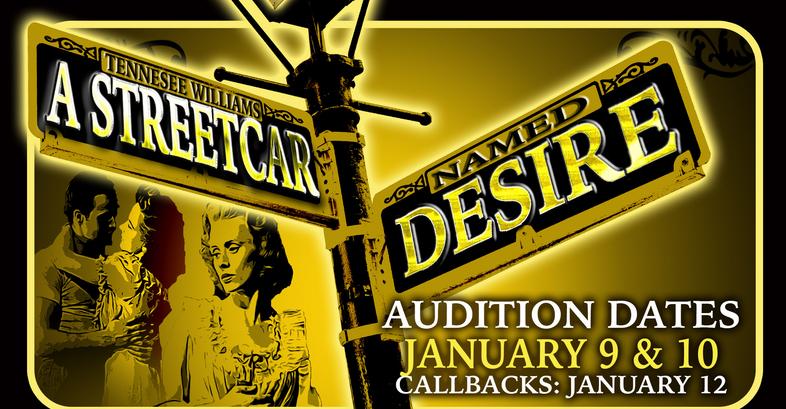 The Grand Theater is looking for non-equity actors for its upcoming production of “A Streetcar Named Desire.” (A small stipend will be paid based on opening night sales.)

Callbacks will be by invitation only on Thursday, January 12th at 7:00 pm. Please complete and submit the form prior to your attendance at audition.

Summary: STREETCAR NAMED DESIRE is the tragic story of Blanche Dubois, Stella and Stanley Kowalski and the people of the French Quarter in New Orleans. Blanche and Stella are sisters who’s lives intersect again after Blanch has to leave their family property, Belle Reve, to find solace in her sister’s home. Stella’s husband Stanley is not thrilled to host his sister-in-law and as the story unfolds, we discover why Blanche had to run to her sister to escape her past in a desperate move to survive. The tensions between these characters and their motivations builds to a shattering climax in this stirring and intense American classic.
Written by Tennessee Williams, Streetcar won the Pulitzer Prize for drama and launched the career of Marlon Brando on Broadway and in film. Vivien Leigh, Kim Hunter and Karl Malden all won Oscars for their performances. Williams' most popular work, A Streetcar Named Desire is one of the most critically acclaimed plays of the twentieth century.
*The Road Company Theater practices non-traditional casting promoting equal opportunities for all people of color, race, age, disability, gender identity and belief.

Character Breakdown:
ALL CHARACTERS MUST USE A MILD SOUTHERN ACCENT
BLANCHE DU BOIS – Female, 30’s- 40’s. Described by Williams as moth-like, Blanche is a remnant of the southern aristocracy and personal tragedy who has survived on her wits and her wiles. She is educated and refined but slowly losing her grasp on reality.
STELLA KOWALSKI – Female - Blanche's younger sister who is married to Stanley and lives in the French Quarter of New Orleans. She has forgotten her genteel upbringing in order to enjoy a more common marriage.
STANLEY KOWALSKI  - Male 30’s An earthy virile working man whose main drive in life is to dominate and who faces everything with brutal realism.
HAROLD MITCHELL (MITCH) – Male 30’s Stanley's friend who went through the war with him. Mitch is unmarried and has a dying mother for whom he feels a great devotion.
EUNICE AND STEVE HUBELL - The upstairs neighbors who quarrel and who own the apartment in which Stella and Stanley live.

Audition Preparation:
To prepare for auditions for Blanche or Stanley please choose one of the following monologues from the show.
BLANCHE : Prepare  short monologue from the show. Act 1S 1, “I took the blows”, Act1 S4, “He acts like an animal” Act 2 S 1 “I don’t know why I screamed” Act 2 S2 “He was a boy” Act 3 S3 “Yes a Big Spider”
STANLEY : Act 3 S2 “When we first met” Act 3 S4 “I’ve been on to you”
STELLA : Please choose a short monologue.
MITCH : Please choose a short monologue.
Other characters will be asked to read sides from the play.
2-3 Males to play Stanley’s poker player friends and a Dr.