Auditions for Memphis at The Road Company Theatre will take place on Sunday, August 21st and Monday, August 22nd with Callbacks on Wednesday, August 24. Please complete and submit this form prior to your attendance at the audition.

You must be able to attend all tech rehearsals and performances in order to be cast. Tech rehearsals will be November 13, 14, 15 and 16.  Performance dates are Novermber 17, 18, 19, 20, 25, 26, 27, December 1, 2 and 3. You will not be cast if you are unable to attend a performance. Rehearsal nights will be Sunday 6-10pm, Monday 7-10pm & Thursday 7-10pm. Please be honest about your conflicts. We reserve the right to cut any cast member that has not been honest with us regarding their conflicts. Auditions: Sunday, August 21 @ 7pm
Monday, August 22 @ 7pm
Callbacks*, August 24 @ 7pm (by invitation only) Vocal Auditions: Please prepare 32 bars or 1 minute 30 seconds song in the style of the show.

Dance Audition:  Please be ready to move for a dance audition.   *Callbacks will be by invitation only.  If you are not called back, it does not mean you are not considered for a role. If you are cast you will get a call or email.  If you do not receive notification, that means you were not cast. There are only a limited number of spots in this show.  Thank you for auditioning for us and we hope you come out again for a future production at The Grand Theatre. *The Road Company Theatre practices non-traditional casting promoting equal opportunities for all people of color, race, age, disability, gender identity and belief.

Memphis is set in the places where rock and roll was born in the 1950s: the seedy nightclubs, radio stations and recording studios of the musically-rich Tennessee city. With an original score, it tells the fictional story of DJ Huey Calhoun, a good ole' local boy with a passion for R&B music and Felicia Farrell, an up-and-coming black singer that he meets one fateful night on Beale Street. Despite the objections of their loved ones (Huey's close-minded mama and Felicia's cautious brother, a club owner), they embark on a dangerous affair. As their careers rise, the relationship in challenged by personal ambition and the pressures of an outside world unable to accept their love.

HUEY CALHOUN, 25-35, vocal range C3-B4, excellent singer in the style of Pop/Rock/R&B, strong mover
Charismatic record store salesman who talks his way into becoming a DJ at an all-white radio station. He falls in love with Felicia, an up and coming black club singr. His relationship with Felicia, and his attempts to bridge the cultural divide and get her songs played on the radio are the central points of conflict in segregated Memphis.

GLADYS CALHOUN, 40-60, vocal range B3-A5, non-dancing role
Huey's stern, traditionally southern mother who works a blue collar job as a waitress to support herself and the son she loves, and about whom she perpetually worries.

MR. SIMMONS, 35--50, light singing, non-dancing role
Conservative owner of the radio station where Huey gets his start. A strong southern businessman who takes a chance on Huey when he sees the money that Huey brings in.

MR. COLLINS/WHITE DJ/WHITE FATHER/GORDON GRANT/ENSEMBLE, 35-50 light singing/non-dancing role
Mr. Collins is Huey's boss who strongly opposes him playing "black music" in the record store despite its popularity with customers. The White DJ appears in the opening sequence. The White Father provides a dramatic moment when he slaps his teenage daughter for listening to so-called "race music". Gordon Grant is an executive from RCA records that tries to persuade Felicia to sign with his label.

CLARA/WHITE MOTHER/ENSEMBLE, 35-45, vocal range alto or mezzo soprano/non-dancing role
Clara is a co-worker of Huey's at the record store who is nervous about crossing the line into selling "race records" but who ultimately gets caught up in the emotional nature of the music. The White Mother appears in the scene where the parents discover their young daughter listening to "race music".

BUCK WILEY/MARTIN HOLTON/PHOTOGRAPHER/ENSEMBLE, 35-45, light singing/non-dancing role
Buck Wiley is the DJ and host of Boppin' with the Blues on WHDZ before Huey takes his place. Martin Holton is a TV network executive from New York.

TEENAGER/ENSEMBLE, 18-25, excellent singer/dancer
We follow her track throughout the story as she finds herself intrigued by "race music" and ends up singing a solo in a gospel church choir sequence.

PERRY COMO/ENSEMBLE, 20-30, excellent singer/dancer
An American singer whose popularity in the 1940's - 1960's focused largely on his appeal to the family values of post-war Middle America.

FRANK DRYER/ENSEMBLE, 20-30, excellent singer/dancer
Owner of Dryer's Grocery Store who calls in to the radio station in support of Huey's radio ads which are making him huge profits.

FELICIA FARRELL, 20-30, vocal range G3-A5, excellent R&B belter, excellent dancer
A fiercely gifted singer who falls in love with Huey despite knowing a relationship with him in prejudiced Memphis is doomed.

GATOR, 20-40, vocal range F#3-A4, excellent singer/strong mover
Bartender at Del Ray's club who hasn't spoken since the age of 5. As the story progresses, he finds his voice.

WAILIN JOE/REVEREND HOBSON/BLACK DJ/ENSEMBLE, 30-40, vocal range Eb3-Gb5, excellent dancer
A stand in for figures in the 1950's such as Little Richard and Screaming Jay Hawkins. Sings "Scratch My Itch" in Act 1.

BE BLACK TRIO/ENSEMBLE, 20-30, excellent singer/dancer
Member of the group that sings the hit song "Everybody Wants to be Black on a Saturday Night".

SELMA/ENSEMBLE, 20-30, excellent singer/dancer
One of Felicia's backup singers from the club.

BESSIE/ENSEMBLE, 20-30, excellent singer/dancer
One of Felicia's backup singers from the club.

LAVERNE/ENSEMBLE, 20-30, excellent singer/dancer
One of Felicia's backup singers from the club. 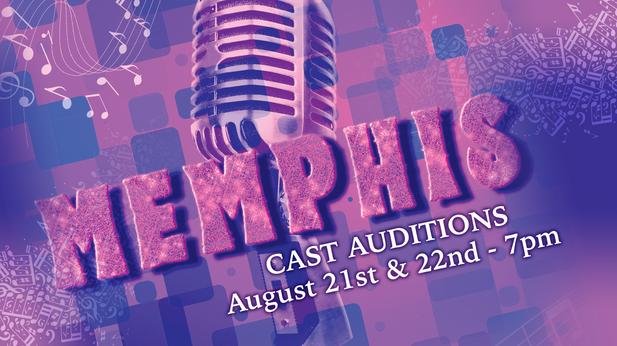