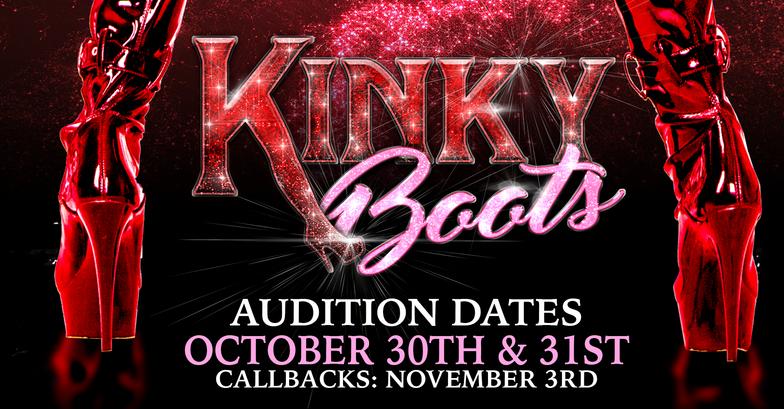 The Grand Theater is looking for non-equity actors for its upcoming production of “Kinky Boots.” (A small stipend will be paid based on opening night sales.)

Character Breakdown:
Please note that the entire cast should be comfortable with a pop/rock style of singing and British accent.
CHARLIE PRICE (Male) Late 20’s – early 30’s. Sings C3–B4. A leading man, just out of university. He is privileged, but likeable — his father owns the shoe factory. He is handsome and loveable but there is a temper right under the skin. Must have a great rock voice, ability to move and be a strong actor.
YOUNG CHARLIE (MALE) Age 8-12.  Charlie as a seven year old boy.  Lost, quiet, reflective.  Sings G4 – D5.
LOLA/SIMON (Male) 30’s–40’s. Sings C3–B4 (with one top C). 5’8” and above is preferable. An emotionally and physically challenging role that requires the body of a boxer with the soul of a Diva, a la Whitney Houston. Must have star presence and feel comfortable wearing everything from full glamour as a scene-stealing drag performer to nothing but boxing trunks. Must have a killer voice with power blues and gospel chops. Strong comedic actor. This is the Tony Award® -winning role originated by Billy Porter on Broadway, written for a non-Caucasian (generally African heritage) male. MUST BE COMFORTABLE IN DRAG AND MUST BRING HEELS TO AUDITIONS IN.

LAUREN (Female) 20’s. Sings B♭3–F♯5. Beautiful, but quirky (not glamourous like Nicola) working class girl who works in the shoe factory. Funny and smart but has had bad luck with men. Terrific comedic actress.
NICOLA (Female) 20’s. Sings B♭3–F♯5. Charlie’s girlfriend since school. Sophisticated looks. She is a social climber, driven and uncompromising. She knows what she wants and goes for it. Must have a great pop voice.
DON (Male) 30’s–40’s. Sings C3–F4 (must have a strong falsetto to D5 for the Finale). Lola’s nemesis. Burly hyper-masculine bear of a factory worker. Has a menacing physicality. Least likely to be seen on a runway in kinky boots. Strong actor required.
GEORGE (Male) 40’s–50’s. Sings C3–F4. Factory Manager, keeping up traditions. Reserved and tightly wound.
THE ANGELS (Male) 20’s–30’s. These are the six drag performers from The Blue Angel Nightclub who perform with Lola. Actors with star quality and personality. Must be versatile and terrific singers (with a contemporary pop/rock/R & B belt) and dancers (required to dance in heels). ALL ANGELS MUST BE COMFORTABLE IN DRAG AND MUST BRING HEELS TO AUDITION IN.  Three Angels sing to C♯5 and three sing to A4.
TRISH (Female) 40’s–50’s. Sings B♭3–D5 and must have strong rock/pop belt. Factory worker who has been there longer than any of the other women. A lot of life experience and a lot of responsibility–this shows in her face. Comedy chops.
PAT (Female) 30’s. Sings B♭3–F♯5 and must be strong pop/rock soprano. Officious office manager who will let loose her wild side when allowed.
MR. PRICE / ENSEMBLE (Male) 40’s–50’s. Sings B♭2–G4 and must have a good voice. Charlie’s father and owner of the shoe factory. Appears in the opening and closing sequence as well as playing a pub patron, factory worker etc for the rest of the show.
HARRY / ENSEMBLE (Male) 20’s–30’s. Sings E3–C4. A contemporary of Charlie’s, but his opposite. Harry is successful, self-aware, confident and carefree. Must have a great rock voice. Also plays a Factory Worker etc.
ENSEMBLE (MALES AND FEMALES) 20’s–50’s. The men and women of the ensemble must be excellent pop/rock singers. They will play factory workers, pub patrons etc. Factory workers should look like real, everyday people and be able to move well.